This picture of what looks like Kanji resulted from an image search using the http://www.devildriver.com engine for the keyword heiroglyphics. My curiosity over the translation stems from the character/word that looks like the letters "gg". It appears 6 times and if you're having trouble finding it, it is the first and last word/character in the composition.
Here is the link to the image file, which is also under the cut. http://thumbs.dreamstime.com/z/background-japanes-hieroglyphics-1-11498572.jpg
( Collapse )

What is this hat style called? I recently saw some guys walking around the neighborhhood with these hats on, 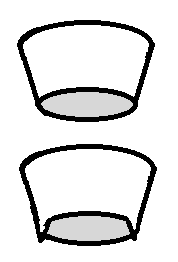 their clothes were sort an outfit that looks like a nightshirt and skinny-legged pajamas. All three hats were white, the 3 men had pale skin, and long dark curly beards. View 2 of the hat is more accurate, the bottom edge of it dipped a little in front of the ears.

I kind if assumed they were of a country/religion that didn't care for women walking up to men and saying, "hey, where are you guys from!?".


Edit: THIS is probably it.

Like millions of Americans, I will be spending Memorial Day nowhere near the beach. However, I want to capture some of that beachy feel. (And Yankee Candle was having a sale.) So, poll time!

Open to: All, detailed results viewable to: All. Participants: 30

Which of these candles* should I use to capture the essence of beach? (Please select no more than two)

Would you buy a ticky scented candle?